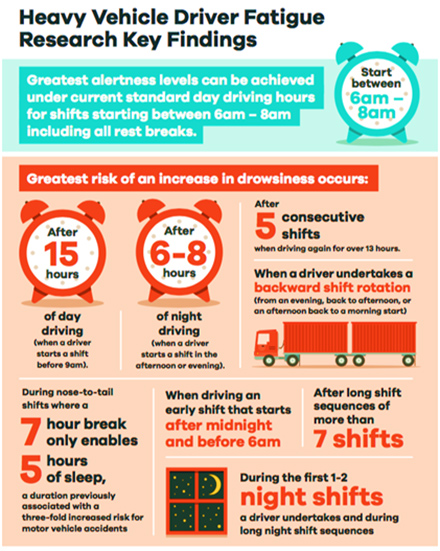 The two-year study evaluated alertness monitoring technology and the impacts of work shifts on driver alertness. It analysed shift start time, the number of consecutive shifts, shift length, shift rotation, rest breaks and their likely impact on driver drowsiness and fatigue. The research involved a study of more than 300 heavy vehicle driver shifts both in-vehicle and in a laboratory, as well as 150,000 samples of retrospective data, and was undertaken in collaboration with the Australian Government, Transport for NSW, Austin Health, Monash University, the Institute for Breathing and Sleep and the heavy vehicle industry.

It was found that slow eye and eyelid movements, longer blink duration and prolonged eye closure are reliable predictors of drowsiness and fatigue. It also confirmed the scientific link between alertness and drowsiness patterns associated with specific work shifts for heavy vehicle driving.

The findings are informing future fatigue policy as part of the NTC-led review of the Heavy Vehicle National Law (HVNL).In 2019 the National Transport Commission (NTC) and the Alertness CRC released the results of a world-first study into heavy vehicle driver fatigue.